Mount Shasta - Who's the Hottie? 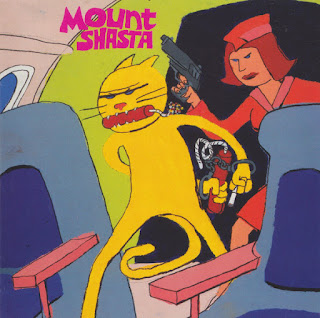 Noise Rock will always be noisy, hence the name, but the levels of noise vary from band to band. Mount Shasta has much of the noise in the vocals, to the point of them being indecipherable yelling with no melody or anything whatsoever. It's best described as what Tad Doyle overdosing on crack would probably sound like. Once you get used to it, they just become part of the sound.

Those riffs though, that's where this album shines like no other. The album is an instant hook, with opener Gimp's riff catching my ear on such a primal level that I knew this was gonna be good. The riffs are of a classic grunge fashion, switching between bluesy metal riffs that Blue Cheer would be proud of and raw garage rock pounding that would make The Stooges take notice. Sometimes it'll go in a more atmospheric drawl in parts of a song to contrast with the bluesy aggression of the rest of the song, which works wonders in Near Famous Jackass and Raw Meat Lincoln Style.

Originally intrigued by the cover art that looks like some obscure 60's cartoon, I found a great riff album. Good stuff.
Posted by Unitron at 21:20